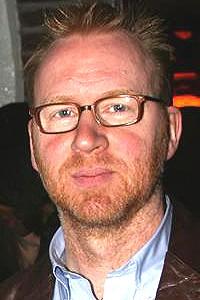 Ian MacNeil
Ian MacNeil (born 1960) is a British scenic designer. He won the 1994 Drama Desk Award for Outstanding Set Design for An Inspector Calls and the 2009 Tony Award for Best Scenic Design of a Musical for Billy Elliot The Musical.

The son of news anchor and journalist Robert MacNeil, he became interested in design at an early age, playing with toy theatres and creating puppet shows with his sister in their yard. "I still remember the pleasure I took in creating those little worlds - complete environments with characters I could manipulate," he recalled in a 1995 interview.[1]

MacNeil studied at the Croydon School of Art [2] and later with Ming Cho Lee in New York City.[3] He spent a decade designing productions in Birmingham, Worcester, York, and Manchester before moving to London, where he made his West End debut with Death and the Maiden in 1991.[4]

MacNeil has designed for many London venues, including the National Theatre, the English National Opera, theAlmeida Theatre, the Young Vic, the Lyric Hammersmith, the Barbican Theatre, and the Royal Court. He has won the Laurence Olivier Award for Best Set Design twice, for An Inspector Calls and Ariodante.[5]

In 1999, MacNeil staged the international tour of the Pet Shop Boys promoting the release of their album Nightlife.[2]

MacNeil is openly gay. He claims he was aware of his sexual identity by the age of five, but never discussed his feelings with his parents, who were divorced, or the stepmother who raised him. He was twenty when he sent his father a letter revealing his secret. The elder MacNeil was not especially surprised and eventually very supportive. In 1993, he spoke publicly about his son's homosexuality at the (American) National Lesbian and Gay Journalists Association convention, and in a 1994 episode of The MacNeil/Lehrer NewsHour, the two discussed their relationship. Ian MacNeil has said

"It's terribly important that a public figure say I love my gay son. ... It needs to be within the sphere of what's everyday and ordinary, and not be gothic." [3]

MacNeil and director Stephen Daldry were involved in a relationship for 13 years.[6] They met at an outdoor production of Alice in Wonderland in Lancaster in 1988 and, after seeing each other sporadically, Daldry decided he wanted to make a commitment. MacNeil was more reticent, but eventually the two settled in a bedsit in Camberwell and began collaborating on theatrical productions.[7][8]