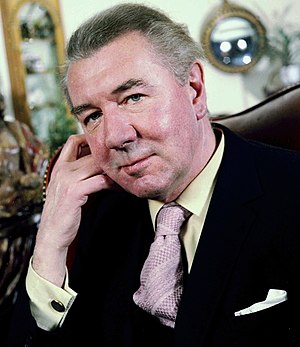 He was born in Bristol and educated at Clifton College and Magdalene College, Cambridge. His parents, Roy Redgrave and Margaret Scudamore, were both actors, but his father emigrated to Australia when Michael was six months old.

He appeared many times on the stage, and also on film and television.

He was married to the actress Rachel Kempson. His two daughters Vanessa and Lynn Redgrave, and his son Corin Redgrave, all became well-known actors.

He was cremated at Mortlake Crematorium, and his ashes were buried at St Paul's Church, Covent Garden.[1]

Corin Redgrave helped his father in the writing of his last autobiography. During one of Corin's visits, Michael said, "There is something I ought to tell you". Then, after a very long pause, "I am, to say the least of it, bisexual". Corin encouraged him to acknowledge his bisexuality in the book. Michael agreed to do so, but in the end he chose to remain silent about it.[2] Although Redgrave had some long-term relationships with men, he also was prone to cruising Victoria or Knightsbridge for what he called "a necessary degradation", a habit that gave him a lasting sense of self-disgust.[3]

Redgrave did not accept his homosexuality easily, and wrestled with periodic bouts of heavy drinking which impaired his memory severely. This exacerbated the slow progress of Parkinson’s Disease from the late 1960s onwards, the disease which was eventually to kill him. The combination of the two led to a reputation for unreliability, which, coupled with the bisexual Laurence Olivier’s competitive jealousy at the National Theatre, severely restricted his classical roles in later years. It was Redgrave’s Evening Standard Theatre Award for Uncle Vanya (1963) which caused Olivier to say, “I don’t really approve of all these awards for actors, unless I’m receiving them.”[4]

These alcohol-fuelled sessions, this rough trade, what Simon Callow called "darker and darker realms sexually",[7] were caught in a spiralling cycle of remorse, repentance and re-enactment. However, they also fed his enormous talent for characters who were repressed volcanos, emotionally stunted, secretive or subject to forbidden desires – Vanya, Crocker-Harris in The Browning Version (1948), ventriloquist Maxwell Frere in Dead of Night (1945), the older Leo in The Go-Between (1971).

Redgrave’s complicated sex life was characterised by an urgency which led him to appear callously indifferent to others around, especially his wife Rachel Kempson, who largely sacrificed her considerably talents and career to his. His insistence on total honesty with her caused her great pain, largely accepted because she felt that she had trapped him into marriage.

Prior to that he had first fallen for Oliver Baldwin, PM Stanley Baldwin’s son, who inspired him with the left-wing ideals which remained with him throughout his life and which he infused into his children Vanessa and Corin. At Cambridge university he fell in with the gay Apostles set (Guy Burgess designed the set for a Shaw play he was in) and he co-edited a magazine, The Venture, with Anthony Blunt) while having an intense two-year affair with a fellow undergraduate Michael Garrett. Later he was to stray into a romance with Edith Evans, twenty years his senior, while working together in As You Like It (1937); she was a great influence on his search for truth in acting.

He had already fathered two children with Rachel when in 1939 he fell in love with Tony Hyndman, a communist who fought with the Republicans in the Spanish Civil War and had previously had affairs with Christopher Isherwood and Stephen Spender. The relationship was at its height through the Phoney War, with the alcoholic Tony increasing Redgrave’s consumption as well, but started cooling in 1940 with Redgrave growing impatient of his lover’s financial demands and lack of will to work. It continued fitfully until the late 1940s, when Tony had a job as a stage manager on Strindberg’s The Father, which Redgrave starred in. a jealous Tony sprinkled tin-tacks all over a sofa Michael was to sit on, and promptly got the sack.

In the meantime, Redgrave had had a fling with Noel Coward, with whom he spent his last night before joining the Navy in 1941, in preference to Rachel. In 1944 he met an American serviceman, Norris Houghton, a writer on theatre separated by war from his long-term partner. In 1947 Houghton directed Redgrave in Macbeth and was largely responsible for establishing his American reputation. Houghton also introduced Redgrave to Fred Sadoff, a good-looking untalented chancer, "self-serving, pushy and undoubtedly out for what he could get".[8] Redgrave, despite looming bankruptcy, set him up in a flat in 1955, took him as an "assistant" to New York and then Saigon for the film of The Quiet American and set up a company to facilitate Fred’s UK work permit. For the next six years Redgrave financed Sadoff’s directorial ambitions, credited as producer but not as co-director, though his contributions often eclipsed his lover’s. Fred left him in the early 1960s and died of AIDS in Los Angeles in 1994.

Between Houghton and Sadoff, in 1947, Redgrave had also met Bob Michell at a party given by gay film director George Cukor. Michell was welcomed into the Redgrave family, Uncle Bob to the children. He came to the UK from Hollywood and stayed for eight years before Fred came on the scene. Bob’s financial demands finally became too much, and he returned to California in 1955. By 1958 he was married, with a son whom he called Michael, after Redgrave.[9] They met up again in 1976, when Redgrave visited Michell while touring Shakespeare’s People. Michell was dying of throat cancer in Nevada, and unable to speak. But they held hands.[10]

A card was found among Redgrave's effects after his death. The card was signed "Tommy, Liverpool, January 1940", and on it were the words (quoted from W H Auden): "The word is love. Surely one fearless kiss would cure the million fevers".[11]