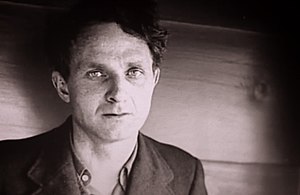 Stephen Spender
Sir Stephen Spender (Stephen Harold Spender, 1909-1950) was a poet and critic. He was born in Kensington and educated at Hall School in Hampstead, Gresham's School, Holt, Charlecote School in Worthing, and then University College School, Hampstead. He went to University College, Oxford, where he became friendly with W H Auden and met Christopher Isherwood, but left without taking a degree. His place among the Oxford poets was assured by the publication of his Twenty Poems in 1930.

He was equally drawn to "boys, gentle and soft" and to "finely moulded" girls. He eventually married twice, but had also tentative experimentation with bronzed German youths.

He had a relationship with "Jimmy Younger" (Tony A R Hyndman) an unepmployed working-class boy from Cardiff who in 1933 became his secretary and traveling companion. They lived together for three years, but in 1936 they broke up and Spender announced his marriage to Inez Pearn. They divorced in 1939. In 1941 he married the pianist Natasha Litvin with whom he had two children.

He founded with Cyril Connolly the magazine Horizon, of which he was co-editor (1939-41), and was co-editor of Encounter (1953-67). He left Encounter when he discovered that the magazine was secretly financed by the US Central Intelligence Agency. His earlier poetry has left-wing political content. He worked for UNESCO in Paris, taught at Berkeley, and served as a consultant for the Library of Congress. He was knighted for his services to literature in 1983.

In 1993, Spender sued American novelist David Leavitt for plagiarism. Spender's 1951 autobiography World Within World had daringly told the story of his relationship with a man referred to as "Jimmy Younger". Leavitt's novel, While England Sleeps, drew a bit too heavily on Spender's life story for one of its main characters, "Edward," and the book was withdrawn.