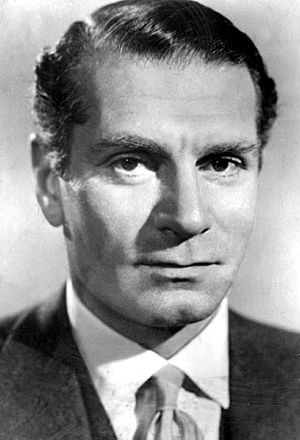 Laurence Olivier in 1961
Laurence Kerr Olivier, Baron Olivier, OM (22 May 1907 – 11 July 1989) was an English actor, director, and producer. He was one of the most famous and revered actors of the 20th century. He married three times, to actresses Jill Esmond, Vivien Leigh, and Joan Plowright. Actor Spencer Tracy said that Olivier was 'the greatest actor in the English-speaking world'.

Olivier played a wide variety of roles on stage and screen from Greek tragedy, Shakespeare and Restoration comedy to modern American and British drama. He was the first artistic director of the National Theatre of Great Britain and its main stage is named in his honour. He is regarded by some to be the greatest actor of the 20th century, in the same category as David Garrick, Richard Burbage, Edmund Kean and Henry Irving in their own centuries. Olivier's AMPAS acknowledgments are considerable: twelve Oscar nominations, with two awards (for Best Actor and Best Picture for the 1948 film Hamlet), plus two honorary awards including a statuette and certificate. He was also awarded five Emmy awards from the nine nominations he received. Additionally, he was a three-time Golden Globe and BAFTA winner.

Since Olivier's death, multiple biographers have produced books about him, several of which include the claim that Olivier was bisexual. Biographer Donald Spoto claimed that Danny Kaye and Olivier were lovers. Joan Plowright, Olivier's widow, denies the affair with Kaye in her memoir. Terry Coleman's authorised biography of Olivier suggests a relationship between Olivier and an older actor, Henry Ainley, based on correspondence from Ainley to Olivier although the book disputes that there is any evidence linking Olivier sexually to Kaye. Olivier's son Tarquin disputed these rumours as 'unforgivable garbage' and sought to suppress them.

In her 2001 autobiography, Joan Plowright wrote, "Larry tended to shower almost everyone he knew with endearments and demonstrative terms of address. In the same way as the macho Sean Kenny had to put up with ‘Shawnie, darling’, and our son Richard had to endure 'Dickie-Wickie' for a short time, there is a published letter addressing his supposed arch-enemy, Peter Hall, as 'My dear Peterkins'. And Larry could say, 'I adored Danny Kaye', in exactly the same way as he said, 'I adored old Ralphie', without anyone suspecting Ralph Richardson of harbouring carnal desires for his own sex. — No man, alive or dead, has ever claimed to have slept with Larry, though the kiss-and-tell merchants of the female sex have tumbled over themselves to boast of a night or two, here or there."

In August 2006, on the radio programme Desert Island Discs, Plowright responded to the allegations of Olivier's mistresses and homosexual affairs, and at that time Plowright felt the need to defend her husband's memory stating: "I don't think there is any need to defend his memory. His performances, his greatness as an artist are there".

And then, referring separately to Olivier's battle with his "demons" which reached a peak in the long years of illness leading up to his death Plowright stated that: "If a man is touched by genius, he is not an ordinary person. He doesn't lead an ordinary life. He has extremes of behaviour which you understand and you just find a way not to be swept overboard by his demons. You kind of stand apart. You continue your own work and your absorption in the family. And those other things finally don't matter.