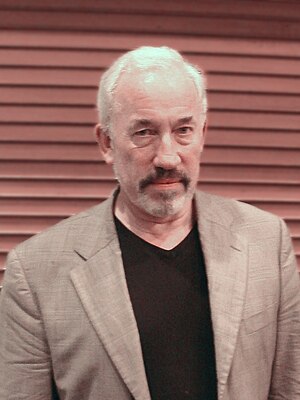 He was born in Streatham and studied at Queen's University, Belfast and the Drama Centre, London. In the 1970s he joined the Gay Sweatshop company and performed in Martin Sherman's Passing By.

He has appeared in many plays and films, and was nominated for BAFTA awards for his roles in A Room with a View (1985) and Four Weddings and a Funeral (1994).

He has written several books, including Being an Actor and biographies of Oscar Wilde, Charles Laughton and Orson Welles. Love is where it falls is the story of his passionate but platonic relationship with the theatrical agent Peggy Ramsay, against thee background of his own gay relationships.

"I'm not really an activist, although I am aware that there are some political acts one can do that actually make a difference and I think my coming out as a gay man was probably one of the most valuable things I've done in my life. I don't think any actor had done so voluntarily and I think it helped to change the culture."[1]

In August 2021 Callow condemned the “strange turn to the tyrannical” taken by Stonewall on self-identification for transgender people [2].