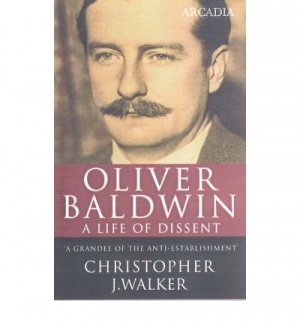 Cover of the book Oliver Baldwin:A Life of Dissent
Oliver Ridsdale Baldwin (1899–1958) was a British politician. He was the son of the Conservative MP (and Prime Minister) Stanley Baldwin, but sat as a Labour MP from 1929 to 1931 and from 1945 to 1947. He and his father remained on good terms despite being on opposite sides politically.[1]

Oliver Baldwin had a long term gay partner, John Boyle. This was accepted within his family, but could not be made public at the time.

When his father became a peer, Oliver Baldwin received the courtesy title of Viscount Corvedale. When his father died in 1947, he took his seat in the House of Lords as Earl Baldwin of Bewdley. Later that year he was appointed Governor of the Leeward Islands (then a British colony in the West Indies) and took John Boyle with him.

"In the 1924, Baldwin’s cheerful homosexuality, impassioned pacifism and left-wing views had a marked effect on the young Michael Redgrave, wrestling with his gay impulses and only beginning to wrest himself free from his High Tory father. In the South of France that summer Baldwin introduced Redgrave to his partner, John Boyle, and the three became firm friends. Baldwin discussed socialism with Redgrave, who began a long journey to the Left, coming under heavy fire as unpatriotic in 1941 for his support for the Communists in the Spanish Civil War. His beliefs in turn shaped those of his children Vanessa and Corin Redgrave, who spent much of the 1960s – 80s supporting and even founding parties of the far left."[2]