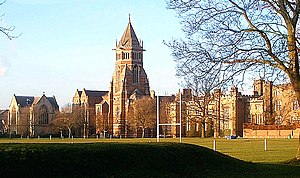 Rugby School
Rugby is a town and borough in Warwickshire. It is famous for Rugby School, a leading public school, at which the game of rugby football was invented in the 19th century.

Tim Barnett was born in Rugby.

On 10 Nov 1984 a demo was held in Rugby after the council there refused to employ any gay or lesbian people. The Gay Youth Movement banner was broken in scuffles with the police. Eighteen people were arrested. Chris Smith MP addressed the demo and announced himself as gay (the first out gay MP).

In 2010, Warwickshire County Council undertook research into the needs of LGBT people in Rugby.[1]

Rugby School was founded in 1567. It came to prominence under the headmastership of Dr Arnold, from 1828 to 1842, the period immortalised in the novel Tom Brown's Schooldays.