The Gay Youth Movement was established in England in 1980 as a national forum and network run by gay and lesbian young people to promote and assist gay youth groups and LGBT young people. GYM also ran a number of events for young LGBT people. Membership was open to individuals under 26.

The first Conference of the GYM was held in London 26-27 July 1980, with £100 being given by the National Association of Youth Clubs to help plan the Conference [1]. It was attended by approximately 80 young people [2]. The Joint Council for Gay Teenagers helped to set up the GYM. From June 1981 the two organisations worked together to produce Gay Youth a magazine. This ran to over 15 issues, but issues after 1982 were produced by GYM alone and the tone and format of the magazine changed significantly [3].

In August 1981 members of the GYM attended Gayfest in Durham where it held its first Annual General Meeting [4]. GYM membership was about 200 in 1982. At a meeting of the JCGT on 30 August 1982 a decision was made by that group to allow all of its work to be absorbed by GYM and for GYM to stand alone as run by young people [5]. 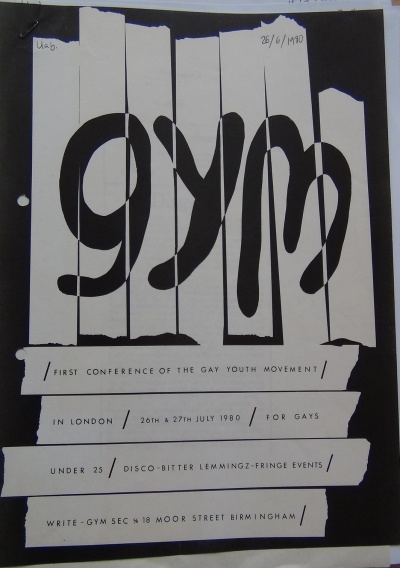 GYM poster for first event (LAGNA archives courtesy of the LGBTQ+ archives at the Bishopsgate Institute, London)
The organisation seems to have folded in 1988 [6].

Courage to be: Organised Gay Youth in England 1967-1990, A history of the London Gay Teenage Group and other lesbian and gay youth groups, by Clifford Williams, is due to be published in 2021 (the Book Guild). The book includes the history of the Joint Council for Gay Teenagers and the Gay Youth Movement. .