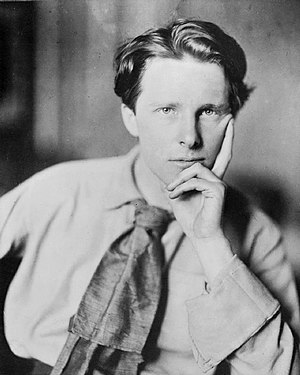 Rupert Brooke
Rupert Brooke (Rupert Chawner Brooke – middle name sometimes given as Chaucer – 3 August 1887 – 23 April 1915) was an English poet known for his idealistic war sonnets written during the First World War, especially "The Soldier" ("If I should die, think only this of me:..."). He was also known for his boyish good looks, which it is alleged prompted the Irish poet William Butler Yeats to describe him as "the handsomest young man in England".

Brooke suffered a severe emotional crisis in 1912, caused by sexual confusion and jealousy, resulting in the breakdown of his long relationship with Ka Cox (Katherine Laird Cox). Brooke's paranoia that Lytton Strachey had schemed to destroy his relationship with Cox by encouraging her to see Henry Lamb precipitated his break with his Bloomsbury Group friends and played a part in his nervous collapse and subsequent rehabilitation trips to Germany.

Brooke fell heavily in love several times with both men and women, although his bisexuality was edited out of his life by his first literary executor. Many more people were in love with him.

Rupert Brooke wrote homoerotic letters to James Beaumont Strachey, they are notably affectionate and reflect the life of the times he was living in.

In 1914 he was commissioned into the Royal Naval Volunteer Reserve, and was on his way to the Gallipoli landings when he died of sepsis from an infected mosquito bite. He is buried on the Greek island of Skyros.