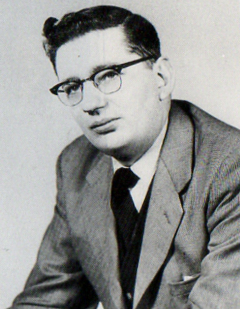 Dyson was educated at Pembroke College, Cambridge. In 1955 he was appointed Assistant Lecturer in English Literature at the University of Wales, Bangor. He later went on to the University of East Anglia. He took early retirement in the 1980s.

Dyson single-handedly took the initiative in forming the Homosexual Law Reform Society (HLRS) in May 1958. He had sent hundreds of letters to MPs and celebrities asking for their support, successfully bringing together an impressive collection of distinguished names, including Noel Annan, Clement Attlee, A J Ayer, Isaiah Berlin, Trevor Huddleston, Julian Huxley, C Day-Lewis, J B Priestley, Bertrand Russell, Donald Soper, A J P Taylor, Angus Wilson and Barbara Wootton. The campaign began with a letter, signed by all these figures, published in The Times on 7 March 1958, calling for the implementation of the Wolfenden Committee's recommendations that the law in relation to male homosexual relations be liberalised.[1]

The same group of people simultaneously founded the Albany Trust, the charitable arm of the HLRS, which became the pioneer national counselling agency for gay men and lesbians. Dyson was Vice-Chairman of the HLRS and a Trustee of the Albany Trust.[2]

During this time he met Cliff Tucker, a senior executive at BP and a Labour councillor in inner London. They lived together for 35 years until Cliff Tucker's death, in 1993.[3] Dyson followed Tucker's wishes and bequeathed the proceeds of their Hampstead home to Tucker's alma mater, the University of Wales, Lampeter. As a result, there is now a scholarship and lecture theatre which bear Tucker's name, and a Fellowship in Poetry named for Dyson.

In 1959 Dyson, together with C B Cox, founded the literary journal Critical Quarterly, described in New Pelican Guide to English Literature as "probably the most influential English literary-critical journal in the academic field over the post-war decades".

As a literary critic, Dyson published works on Shakespeare, Dickens, Samuel Coleridge Taylor and Sylvia Plath, among others.

In 1969 Dyson and Cox published the first of what became a series of five "Black Papers"[4] attacking "progressive" educational methods and the Labour government's policy of replacing grammar schools with comprehensive schools. This and subsequent Black Papers attracted considerable support, especially on the right of the political spectrum. However, they failed to stop the comprehensive schools movement.

Tony Dyson died in London in July 2002 after suffering from leukemia for several years.

The Papers of Tony Dyson and of his partner, Cliff Tucker, are housed at the University of Manchester John Rylands Library Special Collections. A further box of his papers is held at the LSE Archives.[5]