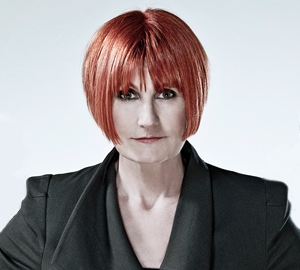 She was responsible for window displays at Harrods for three years, and subsequently became creative director of Harvey Nichols. In 1997 she set up her own retail and brand agency. She is considered a leading authority on brands and retail, and has hosted a number of television shows, including Mary Queen of Shops.

In May 2011, she was appointed by the Prime Minister David Cameron to lead an independent review into the future of the British high street. She published her report The Portas Review in December 2011.[1] She has stated that the aim of her review is to "put the heart back into the centre of our High Streets, re-imagined as destinations for socialising, culture, health, wellbeing, creativity and learning".[2]

Mary Portas was born and brought up in Rickmansworth. She was married to Graham Portas for 14 years and together they had a son and daughter. She now lives in Maida Vale with her civil partner, Grazia magazine fashion features editor Melanie Rickey and her children,[5] after an amicable divorce from her husband.[6]