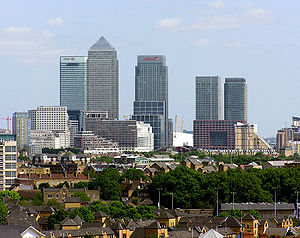 Canary Wharf
The London Borough of Tower Hamlets is a London Borough, north of the Thames, and east of the City of London, covering much of the historic East End. It was created in 1965, replacing three Metropolitan Boroughs (Bethnal Green, Poplar and Stepney). Notable landmarks include the Tower of London (which gave the Borough its name) and the modern Canary Wharf office complex on the Isle of Dogs. Since 2010 the Borough has had a directly elected executive mayor.

Jeremy Bentham was born in Spitalfields in 1748.

The London Cruisers are a women's basketball team, based in Bethnal Green.

In April 2011 a planned East End Gay Pride was cancelled, but East London Pride went ahead in September.

During 2012 the Council was involved in controversy with the local gay community about the possible closure of amateur strip nights at the White Swan, Commercial Road.