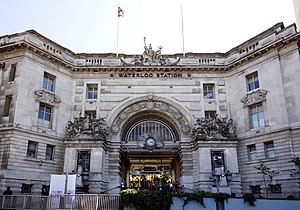 The main entrance to Waterloo station
Waterloo is an area of central London, on the South Bank of the Thames, within the London Borough of Lambeth. It takes its name from Waterloo Station, founded 1848 and named after the Battle of Waterloo (1815). Apart from the station, the most notable features is the South Bank Arts Centre, on the site of the Festival of Britain (1951).

The area has two gay saunas: Pleasuredrome under one of the railway arches[1] and a branch of Chariots in Lower Marsh.[2]

David Morley was murdered in the area in October 2004.

The October Fair was held several years running in Waterloo.

St John's Church, Waterloo Road, has been the venue for events organised by the House of Homosexual Culture and the London Gay Symphony Orchestra.

Oasis Church Waterloo (actually in Kennington) has an LGBTI Hub.