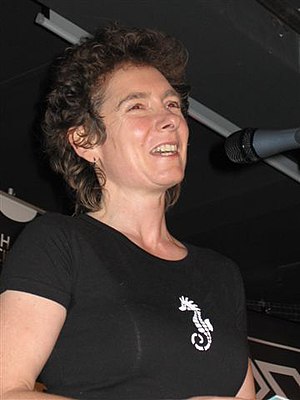 Jeanette Winterson was born in Manchester and adopted by Constance and John William Winterson in 1960.[1] She grew up in Accrington, Lancashire, and was raised in the Elim Pentecostal Church. Intending to become a Pentecostal missionary, she began evangelising and writing sermons at age six.[2][3]

By the age of 16 Winterson had identified as a lesbian and left home.[4] She attended Accrington and Rossendale College, and supported herself at a variety of odd jobs while reading for a degree in English at St Catherine's College, Oxford.[5][6] 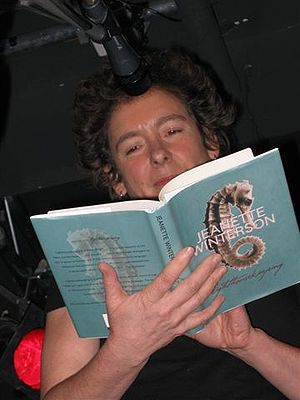 Her first novel, Oranges Are Not the Only Fruit, published after her move to London, is the story of a girl growing up in circumstances similar to her own, rebelling against her mother's narrow evangelical religion, and discovering herself as a lesbian. She tells the same story in a much bleaker way in her 2011 autobiography, Why be Happy when you could be Normal[7]

Winterson's subsequent novels explore the boundaries of physicality and the imagination, gender polarities, and sexual identities, and have won several literary awards. Her stage adaptation of The PowerBook in 2002 opened at the National Theatre, London. She also bought a derelict terraced house in Spitalfields, east London, which she refurbished into a flat as a pied-a-terre and a ground-floor shop, Verde's, to sell organic food.[8]

In 2009, she donated the short story Dog Days to Oxfam's Ox-Tales project comprising four collections of UK stories written by 38 authors. Winterson's story was published in the Fire collection.[9] She also supported the relaunch of the Bush Theatre in London's Shepherd's Bush. She wrote and performed work for the Sixty Six project, based on a chapter of the King James Bible, along with other novelists and poets including Carol Ann Duffy.[10][11]

In 2002, Winterson ended her 12-year relationship with BBC radio broadcaster and academic, Peggy Reynolds.[12] Since then she has been involved with theatre director Deborah Warner and therapist Susie Orbach.[13] Her novel The Passion was inspired by her affair with Pat Kavanagh, her literary agent.[14]

Oranges Are Not the Only Fruit won the 1985 Whitbread Prize for a First Novel, and was adapted for television by Winterson in 1990. This in turn won the BAFTA Award for Best Drama. She won the 1987 John Llewellyn Rhys Prize for The Passion, a novel set in Napoleonic Europe.

Winterson received an OBE in the 2006 New Year Honours "For services to literature".[15]

She was listed under "National Treasures" in the Independent on Sunday's Pink List 2010 and "Lifetime Achievement Awards" in the Pink List 2011 and 2012.