From LGBT Archive
(Redirected from Gateways)
Jump to: navigation, search 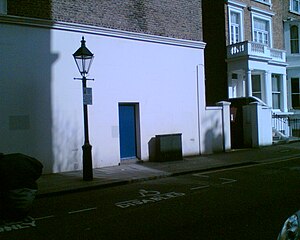 The Gateways club was a noted lesbian nightclub located at 239 Kings Road on the corner of Bramerton Street, Chelsea].[1] It was the longest-surviving such club in the world, open by 1931 [1] and legally becoming a "members club" in 1936. It closed on Saturday 21 September 1985 after some years of only opening for a few hours each weekend.

The final non-public night was the following Monday, as the Kenric group had booked the venue for a social event, and some members who had attended for many years removed the nameplate from the front door as a souvenir, amongst other features and fittings.

Ted Ware (1898–1979) took over the club in 1943 after allegedly winning it in a poker game. Ted was a well travelled man who, unusually for the time, had raised his son from his second marriage on his own. He allowed the club to become a meeting place for the Chelsea Arts Club and was welcoming to the wide variety of people who lived in the area. The club had many gay and lesbian regulars, and was also frequented by black Caribbean people, such as Chester Harriott, who played jazz piano there, [2] and by members of other minority groups that were discriminated against elsewhere.[1]

Ted married Gina Cerrato (1922–2001),[3] a glamorous actress, in July 1953 when he was 55 and she was 31 years old. Gina had been born in Italy in 1922, but had grown up in Cardiff. She came to London to pursue her acting career and had appeared in several films, before meeting Ted in The Gateways in 1947. She and Ted had one daughter together, before Gina gradually took over running the club during the late 1950s.[1]

Smithy (1933–1993) first arrived at the Gateways in 1959 and eventually went on to co-manage the club with Gina. She was originally from California and as a member of the American Air Force, was posted to a base in Ruislip, London. She decided that she wanted to stay in London with Gina and Ted and had an arranged marriage in 1962, which enabled her to stay in the UK.[1]

"The Gates" was one of the few places in the UK where lesbians could meet openly during the 1940s, 50s and 60s. Lesbians and bisexuals flocked to the Gateways, as did curious heterosexuals, and by 1967 Gina made the club women-only.[1]For many women a visit to the Gateways was the first introduction to lesbian life.[4]

The club was described as having a green door with a steep staircase leading down to a windowless cellar bar that was only 35 foot by 18 foot.[1] The walls had been painted by local artists and there was a constant smoky atmosphere.[5] The layout included a bar at one end of the room, with the toilets and a cloakroom at the other.

During the mid 1960s, many lesbians in the club stopped emulating male and female roles. However, the club was still a haven for butch/femme lesbian couples during the era of hardline separatist feminism of the late 1970s and first half of the 1980s. The bar owners worked hard to keep the lesbian politics out of the bar and Gina asked them to take their debates elsewhere.[1]

In its heyday in the 1960s, it was popular with artists and celebrities such as Diana Dors and Dusty Springfield.[5] At this point it was entirely run by Ted Ware's wife, Gina, with the help of Smithy. Maggi Hambling described the club as being 'All sweat and sway of so many people dancing in a small space, that was part of the excitement'. It was the electric atmosphere created by a lot of lusty women that made the club so special, not the surroundings.[1]

During the 1970s, many gay and lesbian people became more politically motivated. Members of the Gay Liberation Front protested outside the bar and encouraged women entering the club to "come out". When they entered the club, Gina called the police and many of the GLF members were arrested and charged with obstruction. The feminists didn't like the club either, because it wasn't political enough. Political activists were tolerated at the Gateways as long as their politics were left at the door on the way in.[1]

During the 1980s, many more gay and lesbian venues started opening up in central London and the fashion was for large gay discos. The Gateways became very quiet during weekday evenings and was only busy on Fridays and Saturdays. The neighbourhood around Chelsea went very upmarket and, in 1985, the club lost its late licence due to complaints about loud music.[1]

After opening only three nights a week for a while, the club was eventually closed in 1985. The last event was the Kenric event on Monday 24 September 1985.

In 1963 the Minorities Research Group, the first Nationwide Lesbian Group in the United Kingdom was started. Members were recruited from amongst the Gateways clientelle and its publication Arena Three was sold openly inside the bar.

The first Kenric group also used to meet regularly in the Gateways club on Monday nights,[1] when the bar was otherwise closed. Kenric is now a nationwide organisation for Lesbian and Bisexual women that is still running.

Jackie Forster reported being able to distribute Sappho magazine and advertise Sappho's events in the Gateways.

The life of this large cellar club was central to the lesbian novel The Microcosm (1966) by Maureen Duffy.

In 1967, when homosexual reform was about to be passed by Parliament, the BBC aired two programmes called Man Alive: Consenting Adults.[6] This program featured an interview with some women at the Gateways club.

The club also appeared as a backdrop (including extended scenes filmed inside the club and featuring regular club-goers) in the 1968 film The Killing of Sister George starring Beryl Reid, Susannah York and Coral Browne], which was one of the earliest mainstream films to feature lesbianism. Filming in the club took place over seven days in June 1968.

The song Green Door was possibly inspired by the club.[7]

Based on the Wikipedia article.