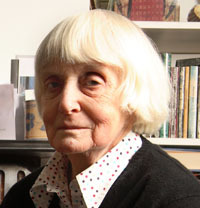 She was born in Worthing, Sussex, but her family came from Stratford in East London and she moved there at the age of 14 when her mother died. She took a degree at King's College, London and taught in Naples and London. She won her first poetry prize at the age of 17, with a poem printed in Adam magazine; soon followed by publication in The Listener and elsewhere.[1] She later edited a poetry magazine called the sixties (1960-61). Her Collected Poems, 1949-84 were published in 1985.

She is also a celebrated playwright and poet, and has written biography and other non-fiction. With Brigid Brophy, she made and exhibited 3-D constructions, “Prop Art”, in the 60s. She is co-founder of the Writers’ Action Group, Vice-President of the European Writers’ Congress, and a fellow of the Royal Society of Literature.

Maureen Duffy was the first gay woman in British public life today to be open about her sexuality.[2] She came out publicly in her work in the early 1960s"[3] and made public comments before the decriminalisation of male homosexual acts in 1967.[4] In 1977 she published The Ballad of the Blasphemy Trial, a broadside against the trial of Gay News for "blasphemous libel".[5]

In 1980 she became the first President of the Gay Humanist Group from 1980 (now GALHA), and is a Patron of the British Humanist Association. At the TUC conference in 1988, as President of the Writers' Guild, she successfully proposed a motion deploring the passing of Section 28 "as an infringement of the basic right to free speech and expression".[6]

In 1991, she took part in Saturday Night Out, on BBC 2, saying that progress in gay rights since her earliest TV appearances had been more limited than she had hoped. In 1995 she was chosen by Gay Times as one of the 200 most influential lesbian and gay people in Britain.[7] She was also included on the Independent on Sunday′s Pink List in 2005[8] In 2014, she received an Icon Award for Outstanding Lifetime Achievement from Attitude magazine.