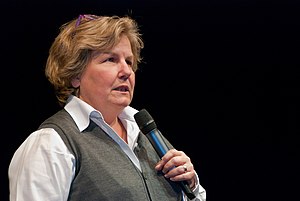 Sandi Toksvig in 2009
Sandra Brigitte "Sandi" Toksvig (born 3 May 1958) is a Danish/British comedian, author and presenter on British radio and television.

Born in Copenhagen, Toksvig began her comedy career at Girton College, Cambridge, where she wrote and performed in the first all-woman show at the Footlights. She was there at the same time as fellow members Stephen Fry, Hugh Laurie, Tony Slattery, and Emma Thompson, and wrote additional material for the Perrier award-winning Cambridge Footlights Revue. She was also a member of Cambridge University Light Entertainment Society, and moved via children's television onto the comedy circuit. She performed at the first night of The Comedy Store in London and was once part of The Comedy Store Players, an improvisational comedy team.

Sandi Toksvig has been a supporter of the Liberal Democrats.

In 2003 she stood as a candidate in the election for the Chancellor of the University of Oxford, supporting a campaign against student fees. She was defeated in the first round of voting, achieving 1,179 first-place votes out of about 8,000 cast. The election was won by Chris Patten.

She is a lesbian and mother of three children; two daughters, Jessica and Megan (born 1988 and 1990) and a son Theo (born 1994). The children were carried and borne by her then partner, Peta Stewart, and were conceived through artificial insemination by donor Christopher Lloyd-Pack. Alice Arnold was in a relationship with Sandi before Clare Balding.

In 1994 charity Save the Children dropped her services as compere of its 75th-anniversary celebrations after she came out, but following a direct action protest by the Lesbian Avengers, the charity apologised. She lives with her civil partner, psychotherapist Debbie Toksvig.