The Killing of Sister George 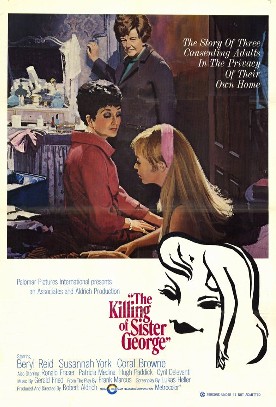 Original movie poster
The Killing of Sister George was the name of a play by Frank Marcus (1964), and a subsequent film (1968) which gave an early depiction of lesbianism.

June Buckridge (played by Beryl Reid in the orignal stage production and the film) is an actress who portrays a lovable district nurse in a BBC soap opera. In real life she is an aggressive butch lesbian, who becomes known as George like the character. The plot centres round a love triangle between George, her much younger girlfriend Childie, and a BBC executive, Mercy Croft, who tells George that her character is to be killed off, and proceeds to woo Childie away from her.

Part of the action of the film was set in the real-life lesbian club, the Gateways.

It has been sugested that the plot was inspired by the dropping of Ellis Powell from Mrs Dale's Diary.