From LGBT Archive
(Redirected from Shakespeare)
Jump to: navigation, search 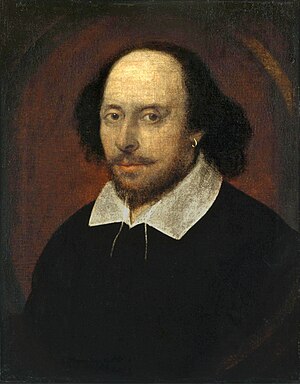 William Shakespeare: the Chandos portrait, artist and authenticity unconfirmed. National Portrait Gallery
William Shakespeare (1564–1616) was a poet and playwright, widely regarded as the greatest writer in the English language. His plays have been translated into every major living language and are performed more often than those of any other playwright.[1]

Shakespeare was born in Stratford-upon-Avon, Warwickshire, and divided his time between there and London, where his plays were performed. He wrote about 38 plays, in several genres, including tragedies, comedies, and history plays, plus a number of sonnets and other poems.

Shakesepare's sexuality, like that of many people in the pre-modern era, has been a subject of controversy. At the age of 18 he married the 26-year-old Anne Hathaway, who was pregnant. 126 of the sonnets appear to be love poems addressed to a young man known as the "Fair Lord" or "Fair Youth"; this is often assumed to be the same person as the "Mr W H" to whom the sonnets are dedicated. The identity of this figure (if he is indeed based on a real person) is unclear; the most popular candidates are Shakespeare's patrons, Henry Wriothesley, 3rd Earl of Southampton, and William Herbert, 3rd Earl of Pembroke, both of whom were considered handsome in their youth. Some authorities however have read the same passages as the expression of intense friendship rather than sexual love. The 26 so-called "Dark Lady" sonnets, addressed to a married woman, are taken as evidence of heterosexual liaisons.