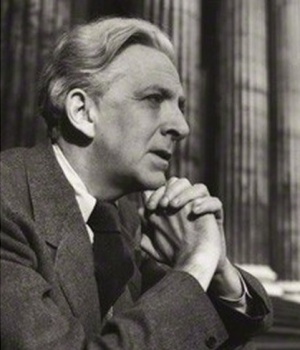 Sir Angus Wilson
Sir Angus Wilson (Angus Frank Johnstone Wilson[1] 1913–1991), a novelist and short story writer, was one of England's first openly gay writers.[2] He was awarded the 1958 James Tait Black Memorial Prize for The Middle Age of Mrs Eliot and later received a knighthood for his services to literature.[3]

"He was the first openly to depict a homosexual subculture in Britain, yet he is much more than a gay novelist."[4]

Wilson was born in Bexhill, Sussex, England, to a Scottish father[2] and South African mother.[5] He was educated at Westminster School and Merton College, Oxford, and in 1937 became a librarian in the British Museum's Department of Printed Books, working on the new General Catalogue. During World War II, he worked in the Naval section Hut 8 at the code-breaking establishment, Bletchley Park, translating Italian Naval codes. A wearer of large, brightly coloured bow-ties, he was one of the "famous homosexuals" at Bletchley.

The work situation was stressful and led to a nervous breakdown, for which he was treated by Rolf-Werner Kosterlitz. He returned to the Museum after the end of the War, and it was there that he met Tony Garrett (born 1929), who was to be his companion for the rest of his life.

Wilson's first publication was a collection of short stories, The Wrong Set (1949), followed quickly by the daring novel Hemlock and After, which was a great success, prompting invitations to lecture in Europe.[6]

He worked as a reviewer, and in 1955 he resigned from the British Museum to write full-time (although his financial situation did not justify doing so) and moved to Suffolk.

From 1957 he gave lectures further afield, in Japan, Switzerland, Australia, and the USA. He received many literary honours. He was knighted in 1980, and was President of the Royal Society of Literature from 1983 to 1988.

In 1985 he left his Suffolk home and Thatcher's England and moved to France.[2] His remaining years were affected by ill health, and he died of a stroke at a nursing home in Bury St Edmunds, Suffolk, on 31 May 1991, aged 77.[1]

His writing, which has a strongly satirical vein, expresses his concern with preserving a liberal humanistic outlook in the face of fashionable doctrinaire temptations. Several of his works were adapted for television. He was Professor of English Literature at the University of East Anglia from 1966 to 1978,[5] and jointly helped to establish their creative writing course at masters level in 1970,[7] which was then a groundbreaking initiative in the United Kingdom.

He was a Vice-President of CHE until his death.[8]