The Report of the Departmental Committee on Homosexual Offences and Prostitution (the Wolfenden report) was published on 4 September 1957. The chairman of the committee was Sir John Wolfenden CBE (Lord Wolfenden), who was asked look into whether homosexual acts between men should remain illegal in England and Wales after three famous men, Lord Montagu, Michael Pitt-Rivers, and Peter Wildeblood, were convicted and sent to prison for homosexual offences. 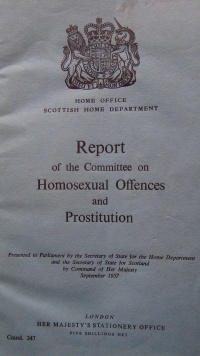 The report recommended that “homosexual behaviour between consenting adults in private be no longer a criminal offence” [1], though this was not widely accepted in the culture of the day. James Adair was the only person not in favour, though Mr Rees and the Revd Scott had resigned before the committee concluded its deliberations. The Committee recommended that the age of consent for men be set at 21 years of age. The recommendations led to the Sexual Offences Act 1967 ten years later, applying to England and Wales only, which replaced the sodomy law in the Offences against the Person Act 1861 and the 1885 Labouchère Amendment which outlawed every homosexual act short of sodomy.

An account of the context in which the committee was appointed and of its internal discussions is included in Frank Mort's Capital Affairs [2]. The text of the part of the report relating to homosexual offences in reproduced in Appendix 2 of Stephen Cretney's book on Same Sex Relationships [3]. Much archive material relating to the Committee was published with commentary in Brian Lewis's 2016 book Wolfenden's Witnesses: Homosexuality in Postwar Britain [4].

The story of the Wolfenden Report was told in the BBC drama Consenting Adults, written by Julian Mitchell and starring Charles Dance (Lord Wolfenden) and Sean Biggerstaff (Wolfenden’s gay son) [5].