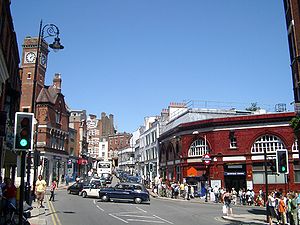 Town centre and Underground station
Hampstead is a district in North London, with the London Borough of Camden. There was a separate Metropolitan Borough of Hampstead from 1899 to 1965.

Hampstead Village, the picturesque area on the hillside below Hampstead Heath, is said to have more millionaires within its boundaries than any other area of the United Kingdom.[1]

Sigmund Freud lived in Hampstead from 1938 to his death the following year.

The King William IV is said to be London's oldest gay bar.[2]

The Hampstead and Kilburn CHE Group was founded in May 1972.