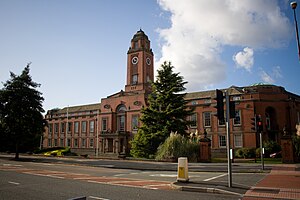 Trafford Town Hall
Trafford is a metropolitan borough in Greater Manchester. Apart from Trafford itself, the borough contains the towns of Altrincham, Sale and Stretford. Historically most of the area was in Cheshire and the rest in Lancashire.

There was a CHE group in Altrincham.

In 2011, Adrian Smith, a Christian working for Trafford Housing Trust, was demoted for posting an item opposed to same-sex marriage on his Facebook page. A court ruled in favour of Mr Smith.[1]

Local LGBT groups have included No! Attitude, for young LGBT people in Trafford[2] and Trafford Prime, a listening project for local LGBT people over 50,

Manchester Village Spartans RUFC are based at Sale Sports Club.

Michael Bishop, Baron Glendonbrook, former airline chief, was born in Bowdon in 1942, and the singer Morrissey was born in Davyhulme in 1959.