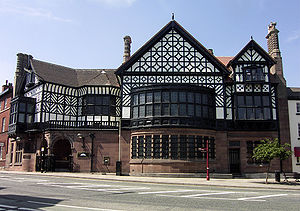 The Old Market Place
Altrincham is an historic market town in the borough of Trafford, Greater Manchester, formerly in Cheshire.

In the mid 1930's a huge group prosecution devastated the lives of the men involved and placed a mark of "shame" upon the Cheshire town of Altrincham - around which it was centred - which was to persist for generations. Because of this, Altrincham became identified among a large section of the population as being synonymous with everything perverted. Whenever the town was mentioned in these circles it was almost certain that homosexuality would rear its head. And if homosexuality was discussed or - more probably - joked about, then the name of Altrincham would invariably be dragged in.[1]

There was a CHE group in Altrincham.