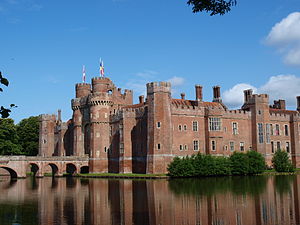 Herstmonceux Castle
Herstmonceux is a village and civil parish in the Wealden District of East Sussex.

Herstmonceux Castle was built starting 1441, and is one of the oldest major brick buildings in the country. In 1777 it was partly demolished and converted to a "picturesque ruin", but a later owner had it restored. Between 1957 and 1988 it was the site of the Royal Greenwich Observatory.

Sir Paul Latham bought the castle in 1932 and completed the restoration.