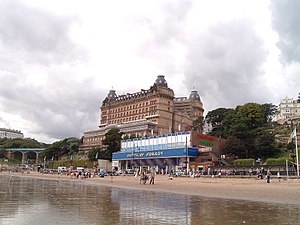 The Grand Hotel Scarborough
Scarborough is a seaside town in North Yorkshire. The Borough of Scarborough, formed in 1974, covers a wider area, including Whitby.

In 1976 the council refused to allow CHE to hold a conference in the town.[1] CHE then campaigned for trade unions to boycott Scarborough as a conference centre, which is thought to have cost the town millions of pounds in lost business.[2]

The Gay Scarborough group dissolved itself in January 2012.[6]