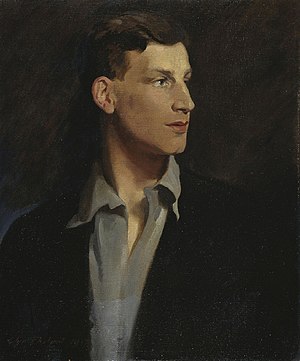 He was born in Matfield, Kent and educated at Marlborough College (a public school in Marlborough, Wiltshire) and at Clare College, Cambridge, where he read history from 1905 to 1907, but left without a degree.

He joined the army as an officer in the Sussex Yeomanry just before the start of the war in 1914, briefly met Rupert Brooke and made friends with Robert Graves. He distinguished himself by his exceptional courage in action and was awarded the Military Cross, but by 1917 he had become strongly opposed to the conduct of the war, and refused to return to the front from leave. Unusually he was not courtmartialled, but diagnosed with "neurasthenia" and send to Craiglockhart War Hospital near Edinburgh, where he met Wilfred Owen. Both men returned to active service.

In 1919 he became editor of the Daily Herald.

Sassoon had a succession of love affairs with men, including the landscape architectural and figure painter, draftsman and illustrator, Gabriel Atkin,[1] actor Ivor Novello; Novello's former lover, the actor Glen Byam Shaw; the German aristocrat Prince Philipp of Hesse; the writer Beverley Nichols; an effete aristocrat, the Hon Stephen Tennant.[2] Only the last of these made a permanent impression, though Shaw remained his close friend throughout his life. In September 1931, Sassoon rented and began to live at Fitz House, Teffont Magna, Wiltshire.[3] In December 1933, to many people's surprise, he married Hester Gatty, who was many years his junior; this led to the birth of a child, something which he had long craved. However, the marriage broke down after World War II, Sassoon apparently unable to find a compromise between the solitude he enjoyed and the companionship he craved.

Separated from his wife in 1945, Sassoon lived in seclusion at Heytesbury in Wiltshire, although he maintained contact with a circle which included E M Forster and J R Ackerley.