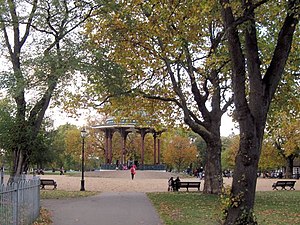 Parts of Clapham Common have been known for gay cruising for many years.

The then Welsh Secretary Ron Davies MP had a "moment of madness" in 1998:[1] he was robbed at knife-point on the Common and met some strangers to whom he gave a lift; they took his car, wallet and phone. Davies resigned, repeatedly denying the incident had anything to do with drugs or sex.[2] Newspapers have since reported that Mr Davies admits being bisexual and has "been successfully treated for a compulsion to seek out gay partners".[3]

The London Pride festival was held on Clapham Common in 1996 and 1997.

Jody Dobrowski was murdered in Clapham Common in 2005 in a homophobic attack. A similar murder on the Common was depicted in a TV film, Clapham Junction (2007) by Kevin Elyot.[4]