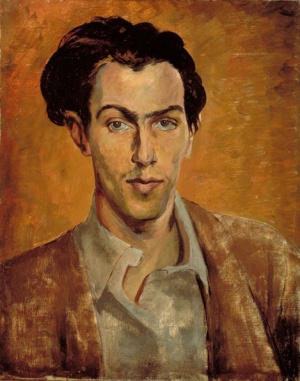 Colquhoun was born in Kilmarnock and was educated at Kilmarnock Academy. He won a scholarship to study at the Glasgow School of Art, where he met Robert MacBryde with whom he established a lifelong gay relationship[1] and professional collaboration, the pair becoming known as "the two Roberts". He joined MacBryde on a travelling scholarship to France and Italy from 1937 to 1939, before serving as an ambulance driver in the Royal Army Medical Corps during the Second World War. After being injured, he returned to London in 1941 where he shared studio space with MacBryde. The pair shared a house with John Minton and, from 1943, Jankel Adler.

Colquhoun's early works of agricultural labourers and workmen were strongly influenced by the colours and light of rural Ayrshire. His work developed into a more austere, Expressionist style, heavily influenced by Picasso, and concentrated on the theme of the isolated, agonised figure. From the mid-1940s to the early 1950s he was considered one of the leading artists of his generation. Along with that of MacBryde, the work of Colquhoun was regularly shown at the Lefèvre Gallery in London. At the height of their acclaim they courted a large circle of friends - including Michael Ayrton, Francis Bacon, Lucian Freud and John Minton as well as the poets George Barker and Dylan Thomas - and were renowned for their parties at their studio (77 Bedford Gardens). Colquhoun was also a prolific printmaker, producing a large number of lithographs and monotypes throughout his career.

During and after the Second World War he worked with MacBryde on several set designs. These included sets for Gielgud's Macbeth, King Lear at Stratford and Massine's Scottish ballet Donald of the Burthens, produced by the Sadler's Wells Ballet at Covent Garden in 1951.

Robert Colquhoun died, an alcoholic, in relative obscurity in London in 1962. MacBryde moved to Dublin, where he was killed in a traffic accident in 1966. Their friend, the Irish writer Anthony Cronin describes them with respect and affection in his memoir Dead as Doornails.