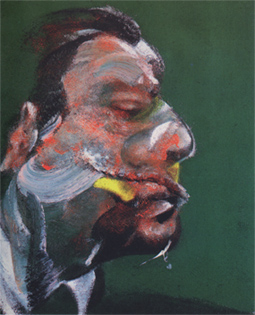 Study for the Head of George Dyer (1966) by Francis Bacon
Francis Bacon (1909–1992) was an Irish-born British painter. He is believed to be a direct descendant of Sir Nicholas Bacon, half-brother of Sir Francis Bacon the philosopher and statesman. His great-great-grandmother, Lady Charlotte Harley, was intimately acquainted with Lord Byron.

Bacon's paintings are noted for their distortion of human figures and faces. By the early 1970s he was being described as "Britain's greatest living painter".

Bacon had a number of gay lovers, initially mainly older men. In 1964 he met George Dyer, a young man who had lived a life of crime. Dyer became his lover and featured in many of his paintings, but descended into alcoholism and committed suicide in 1971, during an exhibition devoted to Bacon's work in Paris. In 1974 he met John Edwards, another young man from the East End, to whom he bequeasthed his entire estate, by then valued at £11 million. Edwards donated the contents of Bacon's South Kensington studio to the Hugh Lane Gallery in London.