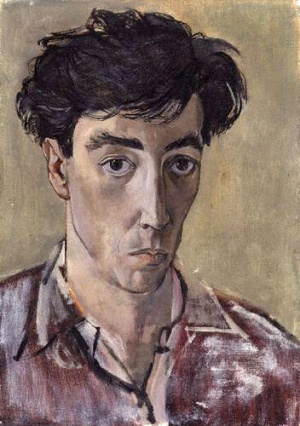 He was born in Great Shelford, near Cambridge, and studied at St John's Wood School of Art and then in France (where he was often accompanied by Michael Ayrton). At the outbreak of World War II he registered as a conscientious objector, but later enlisted in the Pioneer Corps. He was commissioned in 1943, but was discharged on medical grounds in the same year.[1] He resumed painting and took up a teaching post at Camberwell School of Art and Crafts. He later taught at Central School of Arts and Crafts and at the Royal College in London. He had his first solo exhibition at Roland, Browse and Dalliance in 1945 and later moved to the Lefevre Gallery where he exhibited regularly until his death. He shared a studio for some years with Robert Colquhoun and Robert MacBryde, and later with Keith Vaughan.

Minton enjoyed an early success as a painter in the 1940s. He was a prolific draughtsman and illustrator; his style had strong graphic and lyrical qualities well-suited to illustration; in addition he designed posters and wallpapers, and made brief forays into the world of theatre design. The move towards abstraction appalled Minton who found it facile and self indulgent and led to doubts about his own works. He remarked to a friend "I've decided I'm not a painter". Minton committed suicide in January 1957, no longer able to cope with the bouts of despair and unhappiness caused by his alcoholism.