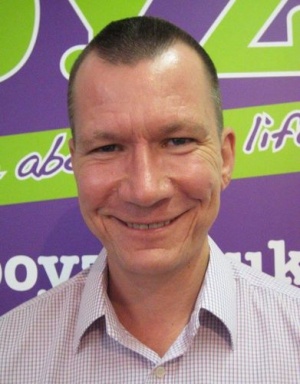 David Bridle
David Bridle (born 1961)[1] is managing editor of Boyz magazine, which he set up with his partner, businessman Kelvin Sollis. Together they ran Chronos Publishing, which in its heyday employed up to 78 people and published seven weekly and monthly magazines and newspapers, including the Pink Paper.

Outcast magazine told the story of how David Bridle and Kelvin Sollis set up charity Positive Lives "to educate and support gay men living with HIV". Their stated aims were to run a helpline, produce information videos, provide housing and promote safer sex. In reality, Outcast claimed the charity had "done no charitable work whatsoever" and alleged that all the money raised by the charity had "mysteriously disappeared".

Bridle and Sollis threatened to sue the magazine, its printer, its website host and others. Libel expert David Price acted for Outcast pro bono and successfully defended the magazine from all claims.

The Charity Commission investigated the allegations made in the article and concluded:

Positive Lives was shut down by the Commission. Bridle and Sollis sold The Pink Paper shortly after.