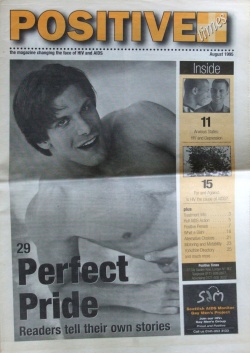 Positive Times front cover, August 1995, This is possibly the first issue and the cover picture is the model from the world's first HIV model agency "Proof Positive".
Positive Times was the first publication in the UK aimed at people living with HIV and AIDS.

It was set up in 1995 by Kelvin Sollis and David Bridle, who published the Pink Paper and Boyz. They took their inspiration from POZ magazine in the States. Positive Times was launched at London Pride 1995 with a huge banner over the entrance of the festival with the picture of a semi-clad hunk from the world's only HIV model-agency "Proof Positive". This was in the days when to be HIV-positive was to be decidedly unwell, if not ugly. Its editor was Dominic Gough, who was the first openly HIV-positive editor; it was designed by Jonathan Harbourne. Positive Times was originally distributed folded inside the Pink Paper, as a monthly news-print magazine, but later became more confident and was printed as a stand-alone glossy A4 magazine. It ceased publication in XXXX when it gave in to its competition Positive Nation, published by The UK Coalition of People Living with HIV and AIDS (UKC).