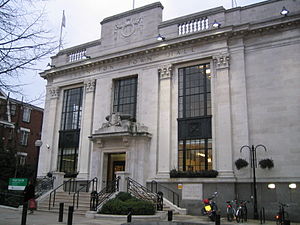 Chris Smith, now Baron Smith of Finsbury, in the London Borough of Islington, was an Islington Councillor (for Barnsbury Ward) before becoming an MP. He received the Freedom of the Borough of Islington in 2010, and was warmly congratulated on that occasion by gay Councillor Terry Stacy, leader of the Liberal Democrat group on the council.[5]

In October 2016, Islington Council announced that it was setting up a new LGBT archive. The archive collection, called Islington Pride, has been HLF funded as a LGBTQ+ Heritage archive project and is housed in the Islington Local History Centre.[6]

Islington Pride has a heritage map with 50 plaques placed at various locations in the borough. [7]