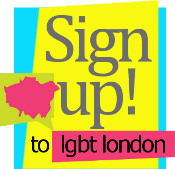 LGBT London "sign up" logo
LGBT London – www.lgbtlondon.com – was a web portal with links to organisations throughout Greater London. It was set up in 2010 by the LGBT Consortium, as part of a scheme funded by London Councils.

The LGBT London site replaced an earlier site set up in 2008 by Ross Burgess as a Ning group, following the closure of Linking London. In 2010 the Ning organisation started charging for groups, so it was decided to close this site down and migrate its users onto the new site to be maintained by the LGBT Consortium.

LGBT London had a directory of LGBT groups, a list of forthcoming events, news, and other resources. Its formal launch came on 29 March 2011 at an event in London which also saw the presentation of the Derek Oyston Achievement Award to Michael Brown. The site's home page featured a changing display of the logos of the various groups.

In July 2013, following the end of funding from London Councils, the site was taken down.

The following have all been retrieved via the Web Archive: