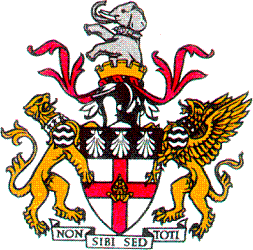 Borough coat of arms. The elephant crest is used as the logo for the Kings Cross Steelers
Camden is a London Borough, comprising the former boroughs of Holborn, St Pancras and Hampstead. It includes a number of districts, such as Camden Town, Swiss Cottage, Kings Cross and Bloomsbury, plus parts of Covent Garden and the West End.

Lincoln's Inn Fields was a mollie cruising area in the 18th century.

In 1987 provision for gay young people in the London Boroughs of Islington and Camden was made with the setting up of North London Line.

There is a Camden LGBT Forum.[2]