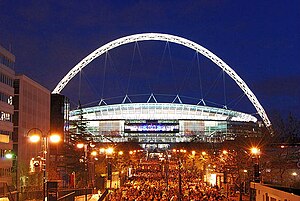 Wembley Stadium
The London Borough of Brent is a borough in north-west London. It was formed in 1965 by merging the former metropolitan boroughs of Wembley and Willesden. Notable local landmarks include Wembley Stadium.

There was a Barnet and Brent CHE Group, a Hampstead and Kilburn CHE Group and a Harrow & Brent Lesbian & Gay Group.

Mosaic Youth was a service for young LGBT people in Brent (now relocated in Camden).[1]

In 2022 an event was held in Willesden Library promoting an LGBT archive for the Borough. Photographs and recollections from Gary James and items from Mosaic's history were added to the archive. A discussion about LGBT youth history including the London Gay Teenage Group invloved author and historian Clifford Williams and film and media lecturer Ed Webb-Ingall.