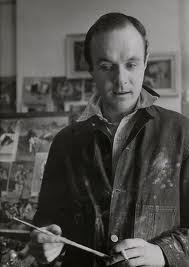 Keith Vaughan in 1948
Keith Vaughan (John Keith Vaughan, 1912–1977) was a gay British painter, considered one of the best figurative painters working in Britain in the post-war years. The themes of his paintings remained constant throughout his career: the male nude in the landscape, and pure landscape paintings.[1]

Keith Vaughan was born in Selsey in Sussex. He did not attend art school but painted in his spare time whilst working for an advertising agency. During World War II he was a conscientious objector: he joined St John's Ambulance and later served with the Pioneer Corps and acted as an interpreter for German POWs.

During the war Vaughan formed friendships with the painters Graham Sutherland and John Minton, and shared premises with Minton from 1946. Through these contacts he formed part of the Neo-Romantic circle of the immediate post-war period, but he rapidly developed an idiosyncratic style which moved him away from the Neo-Romantics. Concentrating on studies of male figures, his works became increasingly more abstract with time.

Vaughan worked as an art teacher at the Camberwell College of Arts, the Central School of Art and later at the Slade School. He became an Honorary Fellow of the Royal College of Art in 1964.

Vaughan is also known for his journals, selections from which were published in 1966 and more extensively in 1989, after his death. A gay man troubled by his sexuality, much of what is known about him is through those journals. He was diagnosed with cancer in 1975 and committed suicide in 1977 in London, recording his last moments in his diary as the drugs overdose took effect.

His painting Theseus and the Minotaur, previously owned by Lord Attenborough, was sold for £313,250 at Sotheby's in 2009.[2]

The play Locked In by Peter Scott-Presland tells the story of Keith Vaughan.