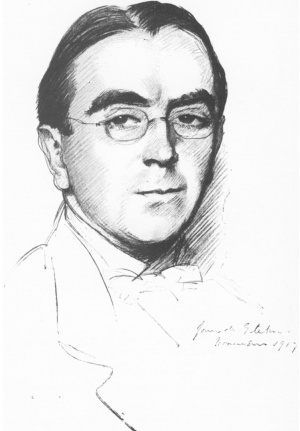 John Ireland was born in Bowdon, near Altrincham, Manchester, into a family of Scottish descent and some cultural distinction. His father, a publisher and newspaper proprietor, was 70 years old when John was born; his mother was 30 years younger than Alexander. She died in October 1893, when John was 14, and Alexander died the following year.[1] John Ireland was described as "a self-critical, introspective man, haunted by memories of a sad childhood".[2]

Ireland studied piano and organ at the Royal College of Music, and later composition under Charles Villiers Stanford. He subsequently became a teacher at the College himself, his pupils including Benjamin Britten (who found Ireland's teaching less interesting). He was sub-organist at Holy Trinity Sloane Street, London SW1, and later became organist and choirmaster at St Luke's Church, Chelsea.

Ireland began to make his name in the early 1900s as a composer of songs and chamber music. His Violin Sonata No. 1 of 1909 won first prize in an international competition organised by the well-known patron of chamber music W W Cobbett. Even more successful was the premiere of his Violin Sonata No. 2, which drew crowds to the Wigmore Hall and attracted the interest of a number of publishers, including one who arrived on Ireland's doorstep the morning after the concert.[3]

Ireland frequently visited the Channel Islands and was inspired by their landscape. In 1912 he composed the piano piece The Island Spell while staying on Jersey, and his Sarnia for piano was written there in 1940. He was evacuated from the islands just before the German invasion during World War II.

On 10 September 1949, his 70th birthday was celebrated in a special [Prom concert, at which his Piano Concerto was played by Eileen Joyce,[4] who was also the first pianist to record the concerto, in 1942.

Ireland retired in 1953, settling in the small hamlet of Rock, Sussex , where he lived in a converted windmill for the rest of his life. It was there where he met the young pianist Alan Rowlands who would be Ireland's choice to record his complete piano music.[5]

He died at age 82 in Washington, West Sussex of heart failure. He is buried in Shipley churchyard near his home.

From Charles Villiers Stanford, Ireland inherited a thorough knowledge of the music of Beethoven and Brahms, but as a young man he was also strongly influenced by Debussy and Ravel as well as by the earlier works of Stravinsky and Bartók. From these influences, he developed his own brand of "English Impressionism", related more closely to French and Russian models than to the folk-song style then prevailing in English music.

Like most other Impressionist composers, Ireland favoured small forms and wrote neither symphonies nor operas, although hisPiano Concerto is among his best works. His output includes some chamber music and a substantial body of piano works, including his best-known piece The Holy Boy, known in numerous arrangements. His songs to poems by A E Housman, Thomas Hardy, Christina Rossetti, John Masefield, Rupert Brooke and others, are a valuable addition to English vocal repertoire. Due to his job at St Luke's Church, he also wrote hymns, carols, and other sacred choral music; among choirs he is probably best known for the anthem Greater love hath no man, often sung in services that commemorate the victims of war. The hymn tune My Song Is Love Unknown is sung in churches throughout the English-speaking world, as is his Communion Service in C major.

He appears as pianist in a recording of his Fantasy-Sonata for Clarinet and Piano with Frederick Thurston,[6] and his Violin Sonata No. 1 (of 1909) with Frederick Grinke,[7] who performed and recorded several of his chamber works. His Piano Sonatina of 1926–27 and a number from his cycle Songs Sacred and Profane (1929) were dedicated to his friend the conductor and BBC music producer Edward Clark.[8][9][10]

Ireland wrote his only film score for the 1946 Australian film The Overlanders, from which an orchestral suite was extracted posthumously by Charles Mackerras. Some of his pieces, such as the popular A Downland Suite and Themes from Julius Caesar, were completed or re-transcribed after his death by his student Geoffrey Bush.

John Ireland was a lifelong bachelor, except for a brief interlude when, in quick succession, he married, separated, and divorced. On 17 December 1926, aged 47, he married a 17-year pupil, Dorothy Phillips. This marriage was dissolved on 18 September 1928,[1] and it is believed not to have been consummated.[11] He took a similar interest in another young student, Helen Perkin (1909–1996), a pianist and composer, to whom he dedicated both the Piano Concerto in E flat and the Legend for piano and orchestra (which began life as a second concerto). She gave the premiere performance of both works,[1] but any thoughts he had for a deeper relationship with her came to nothing when she married George Mountford Adie, a disciple of George Gurdjieff, and she later moved with Adie to Australia.[12] Subsequently, Ireland withdrew the dedications. In 1947 Ireland acquired a personal assistant and companion, Mrs Norah Kirkby, who remained with him till his death.[1] Despite these associations with women, it is clear from his private papers that his interests lay elsewhere and many commentators support this view.[13]

Norah Kirkby destroyed portions of Ireland's papers and correspondence upon his death, donating the remainder to the British Library.

"Despite his brief and ultimately unsuccessful relationships with women, there is no doubt that Ireland was considerably more interested in men, specifically much younger men. There is, however, no direct evidence that Ireland ever had a close sexual relationship with a man or a boy, and he did not particularly mix in homosexual circles. He was a very private figure, and because of this and the problems involved in extracting relevant information, there has never been any truly open discussion of Ireland's personal life. In particular, there has been little written about his religious convictions or his sexuality." [14][15]