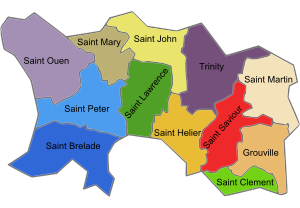 Jersey parishes
Jersey is the largest of the Channel Islands. The Bailiwick of Jersey is a UK Crown Dependency with its own government and laws.

In 1923 Louis Delanoe, a Jersey resident, killed his partner and then committed suicide.

The lesbian artists Claude Cahun and Suzanne Malherbe lived in Jersey from 1937 onwards, becoming active in the resistance during the Nazi occupation.

In July 2014 moves to introduce same-sex marriage were put on hold, leading to protests at the island's first Pride rally.