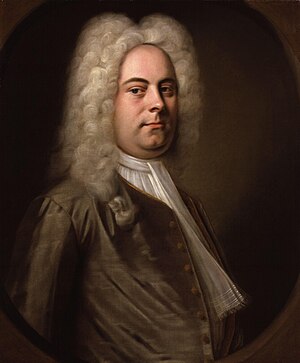 George Frideric Handel
George Frideric Handel (1685–1759) was a composer, noted for his orchestral and choral music, including the oratorio Messiah. He was born and brought up in the German city of Halle, and is known in German as Georg Friedrich Händel, but moved to England in 1712 and became a naturalised British citizen in 1727.[1]

Handel's father discouraged his early interest in music, and he studied law for a time. His first two operas were produced in 1705, and in 1706 he travelled to Italy, producing sacred music and operas. He moved to England in 1712, and composed music for Queen Anne and Lord Burlington. In 1717 he became house composer at Cannons in Middlesex, the home of the Duke of Chandos, for whom he composed the Chandos Anthems. Many of his operas and oratorios were first performed at the King's Theatre in the Haymarket (now Her Majesty's Theatre) or at the Theatre Royal Covent Garden, but his most famous oratorio, Messiah, using words from the King James Bible, was first performed in Dublin in 1742.

While in Germany, Handel had been Kapellmeister to the Elector of Hanover, who later became King of England as George I. Handel wrote the very popular Water Music for the king in 1717. In 1727 Handel wrote the coronation music for the king's successor Georg II; The anthem Zadok the Priest has been performed at every coronation since then. In 1749 the king commissioned Handel's Music for the Royal Fireworks: over 12,000 people attended its public rehearsal in Vauxhall Pleasure Gardens, causing a three-hour traffic jam.

"the master of us all... the greatest composer that ever lived. I would uncover my head and kneel before his tomb. ... Go to him to learn how to achieve great effects, by such simple means."[2]

Handel never married, and there is no firm evidence that he ever had a romantic relationship with a man or woman. George II is said to have asked him about his "love of women," to which Handel replied evasively that he had no time for anything but music. There have been speculations that he might have been gay, but this can never be proved one way or the other.[3] According to Ellen Harris, professor of music at the Massachusetts Institute of Technology, there is a "clear homosexual subtext" to Handel's operas:

"The cantatas are certainly homosexual. ... Many of the cantatas avoid identifying the gender of the beloved - for instance they are identified simply 'as the beautiful eyes' or 'little lips' in a way that is deliberately ambiguous. Also they were designed to be sung by both men and women - both castrato and soprano singers."[4]

Dr Ellis maintains that, as he got older, Handel became part of a homosexual circle that encouraged his work on the sexually ambiguous cantatas. Lord Burlington and the Duke of Chandos, his two principal British patrons, were both homosexual, she claims, as was Prince Francesco Maria Ruspoli, one of his Italian benefactors.

"Most of the men who commissioned these pieces had already been identified with the homosexual culture of their time. ... The cantatas were private pieces for patrons to be performed in their houses. ... Even though most of Handel's patrons were married many of them had same-sex affairs."[4]