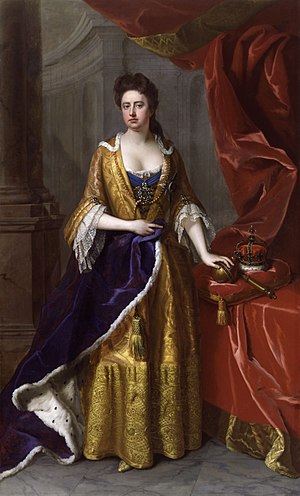 Portrait of Queen Anne by Michael Dahl, 1705
Queen Anne (1665–1714) became Queen of England, Scotland and Ireland on the death of William III in 1702. She was Queen of Great Britain and Ireland following the Act of Union (between England and Scotland) in 1707.

Anne was married to her cousin prince George of Denmark. She was pregnant many times, but none of her children survived her. Her husband died in 1708.

Anne had a long-standing close friendship with Sarah Churchill, later the Duchess of Marlborough, but they fell out in 1708, and Anne transferred her affection to Sarah's cousin Abigail Masham. The relationship between Anne and Abigail was rumoured at the time to be a lesbian one.