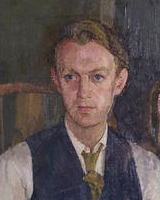 He was brought up in South Shields, and attended Durham University, but spent many years away from the UK, particularly in Japan.

He was a conscientious objector during World War II.

His volumes of autobiography are very frank about his homosexual adventures.

In 1977 Gay News published his poem "The Love That Dares to Speak Its Name" about a Roman centurion lusting for the dead Jesus. This led to Gay News and its editor Denis Lemon being prosecuted for blasphemous libel by Mary Whitehouse.