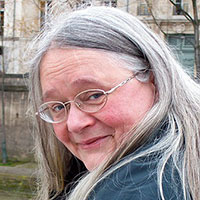 Alison Hennegan
Alison Hennegan is a lecturer at the University of Cambridge and a Fellow[1] of Trinity Hall. She is also a prominent campaigner for gay and lesbian rights in the UK and a journalist. [2]

Hennegan's academic work focuses on lesbian and gay themes in English literature, particularly in British Modernism. She began writing her PhD thesis, “Literature and the Homosexual Cult, 1890–1920” in Cambridge in 1970, but her heavy involvement in gay activism forced her to put her research on hold. She returned to the academy in the 1980s and has published articles on the lesbian reader, Oscar Wilde and the Symbolist and decadent movements of the late nineetenth and early twentieth centuries. Other academic publications include scholarly introductions to the Virago Modern Classics editions of Adam’s Breed and The Well of Loneliness by Radclyffe Hall.

Her work in literary journalism has included a period as Literary Editor of Gay News (1977–83), and regular articles in the New Statesman (1984–88). She has also been a prominent gay rights activist in the UK: she served as a Vice-Chair of the Campaign for Homosexual Equality (1975–77) and National Organizer for the gay counselling organization FRIEND. [3]

Based on the Wikipedia article of the same name