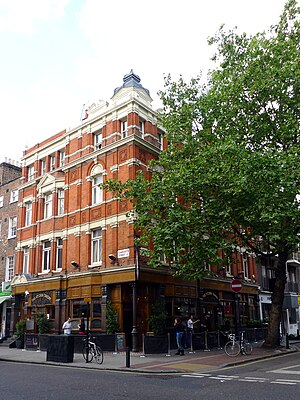 The Fitzroy Tavern
The Fitzroy Tavern is a pub in the Fitzrovia district of thd West End. It was built as the Fitroy Coffee House in 1883, and converted to a pub, originally called "The Hundred Marks", in the early years of the 20th century.

During the period from the 1920s to the 1950s it was famous as a meeting-lace for artists and intellectuals, and in particular was pub frequented by gay men in the 1930s and 40s. It avoided prosecution for over a decade because, according to John Heath-Stubbs, it was "common knowledge that Charlie Allchild (the landlord) had bribed the police".

Michael Davidson described the Fitzroy Tavern (in the early 1940s) thus: 'now nightly a bedlam of rampaging drunks and a mart of male prostitutes' [1].

Other clubs and pubs popular with homosexuals at the time were the York Minster, the Swiss (now Comptons) [2], and the Marquis of Granby in Soho. Peter Wildeblood called them "less [than] discreet", rough and cruisy. Throughout the 1930s respectable men in evening dress and camp queans solicited sailors and workmen in the Running Horse. Other venues included the Billie's Club, the Hungry Horse, Gerano's in New Compton Street, Chez Victor in Wardour Street. The downstairs bar at the Ritz Hotel was frequented by men from high society, nicknamed l’Abri (the shelter), and the Trocadero Long Bar, owned by Lyon's Corner House.