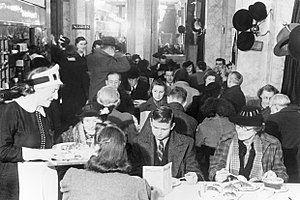 Teatime at the Coventry Street Corner House, 1942
Lyon's Corner Houses were a small chain of popular cafes in the West End of London, between 1909 and 1977.

Corner Houses were noted for their art deco style. Situated on or near the corners of Coventry Street, Strand and Tottenham Court Road, they and the Maison Lyonses at Marble Arch and in Shaftesbury Avenue were large buildings on four or five floors, the ground floor of which was a food hall with counters for delicatessen, sweets and chocolates, cakes, fruit, flowers and more. As well as this they had hairdressing salons, telephone booths, theatre booking agencies and at one period a twice-a-day food delivery service. On the other floors were several restaurants, each with a different theme and all with their own musicians. For a time the Corner Houses were open 24 hours a day, and in their heyday each one employed in the region of 400 staff. They were colourful and bustling, with bright lights and ingenious window displays designed by Kay Lipton (née Man). In the post-war gloom, the Corner Houses, smarter and grander than the local tea shops, provided a degree of escapist relaxation. Between 1896 and 1965 Lyons also owned the Trocadero which was similar in size and style to the Corner Houses.

From the 1930s, when the police started clamping down on gay men meeting in public cafés and bars, to appear "more normal" men met only in the first floor restaurant. Gerald Dougherty said "there was nothing to say it was different, but the waitresses knew it and wouldn't let a woman sit anywhere near".

Other clubs and pubs popular with homosexuals at the time were the York Minster, the Swiss (now Comptons) and the Marquis of Granby in Soho. Peter Wildeblood called them "less [than] discreet", rough and cruisy. Throughout the 1930s respectable men in evening dress and camp queans solicited sailors and workmen in the Running Horse. Other venues included the Billie's Club, the Hungry Horse, Gerano's in New Compton Street, Chez Victor in Wardour Street. The downstairs bar at the Ritz Hotel was frequented by men from high society, nicknamed l’Abri (the shelter), and the Trocadero Long Bar, another Lyon's Corner House.