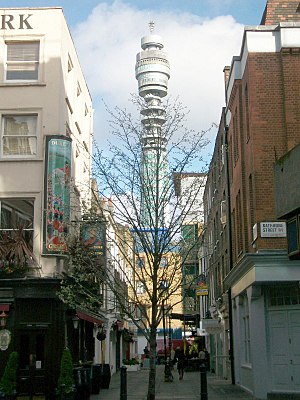 Charlotte Place and the BT Tower
Fitzrovia is an area in central London, to the north of Soho. It is partly in Camden and partly in the City of Westminster. The area is roughly bounded by Oxford Street, Gower Street, Euston Road and Great Portland Street. It takes its name from the Fitzroy Tavern in Charlotte Street. The name Fitzrovia appears to have appeared first in print in Tom Driberg's William Hickey gossip column in the Daily Express in 1940.[1]

The most prominent landmark of the area (literally) is the BT Tower (originally the Post Office Tower).

The Cleveland Street scandal, in 1899, featured a local male brothel with aristocratic patrons.

"In Fitzrovia,just north of Oxford Street, there was a cluster of pubs – the Bricklayers Arms, the Wheatsheaf, the Marquis of Granby and the Fitzroy Tavern – which if not quite as queer as the Running Horse or the Cavour in Leicester Square were bohemian enough to accommodate 'the fringe of the gay worlds'."[2]