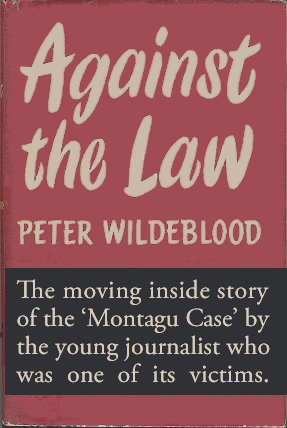 Cover of the first edition of Against the Law (1955) 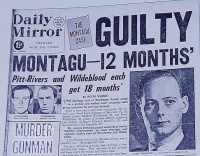 Peter Wildeblood (19 May 1923 – 14 November 1999) was a British-Canadian journalist, novelist, playwright, and gay rights campaigner. He was one of the first men in the UK to publicly declare his homosexuality.

He was convicted of 'conspiracy to incite certain male persons to commit serious offences with male persons' in the 1954 trial with Lord Beaulieu and Michael Pitt-Rivers and was sentenced to 18 months in prison, Beaulieu for 12 months.

The prosecution provoked a wave of sympathy from the Press and the public, many of whom felt it amounted to little more than an unedifying witch-hunt. It was the first time since Oscar Wilde in 1895 that this law had led to a conviction. The case led eventually to the Wolfenden Report, which in 1957 recommended the decriminalisation of homosexuality in the United Kingdom.

Against the Law, 1955: an account detailing his experiences at the hands of the law and the British establishment which brought to light the appalling conditions in Wormwood Scrubs; and encouraged campaigns for prison and homosexual reform.