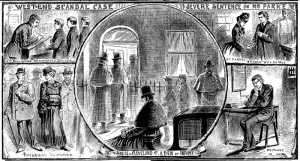 Cleveland Street Scandal
The Cleveland Street scandal occurred in 1889, when a homosexual male brothel in 19 Cleveland Street, Fitzrovia, was discovered by police. At the time, sexual acts between men were illegal in Britain, and the brothel's clients faced possible prosecution and certain social ostracism if discovered. It was rumoured that one of the brothel's clients was Prince Albert Victor, grandson of Queen Victoria, eldest son of the Prince of Wales and "Heir Presumptive" – second-in-line to the British throne. The government, particularly the Home Secretary and Lord Salisbury, the Prime Minister, was accused of covering up the scandal to protect the names of any aristocratic patrons.

One of the clients, Lord Arthur Somerset, was an equerry to the Prince of Wales. He and the brothel keeper, Charles Hammond, managed to flee abroad before a prosecution could be brought. The male prostitutes, who also worked as telegraph messenger boys for the Post Office, were given light sentences and no clients were prosecuted. After Henry James Fitzroy, Earl of Euston, was named in the press as a client, he successfully sued for libel. The British press never named Prince Albert Victor, and there is no evidence he ever visited the brothel, but his inclusion in the rumours has coloured biographers' perceptions of him since.

The scandal fuelled the attitude that male homosexuality was an aristocratic vice that corrupted lower-class youths. Such perceptions were still prevalent in 1895 when the Marquess of Queensberry accused Oscar Wilde of being an active homosexual. Wilde sued Queensberry for libel but his case collapsed. He was arrested, found guilty of indecency, and condemned to two years' hard labour (the maximum sentence for "gross indecency").