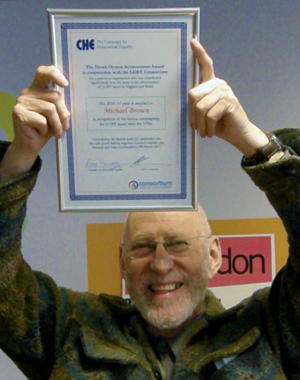 The 2009 award was organised in conjunction with GALHA (the Gay and Lesbian Humanist Association) and went to Sue Sanders of Schools Out and LGBT History Month. CHE vice-president Ray Gosling presented it to Sue Sanders at GALHA's 30th anniversary event (also commemorating 40 years of CHE) on 10 July 2009.

The 2010–11 award was organised in conjunction with the LGBT Consortium and went to the veteran gay campaigner, Michael Brown. Ross Burgess of CHE presented it to Michael Brown at a Consortium event on 29 March 2011 which also included the launch of LGBT London.